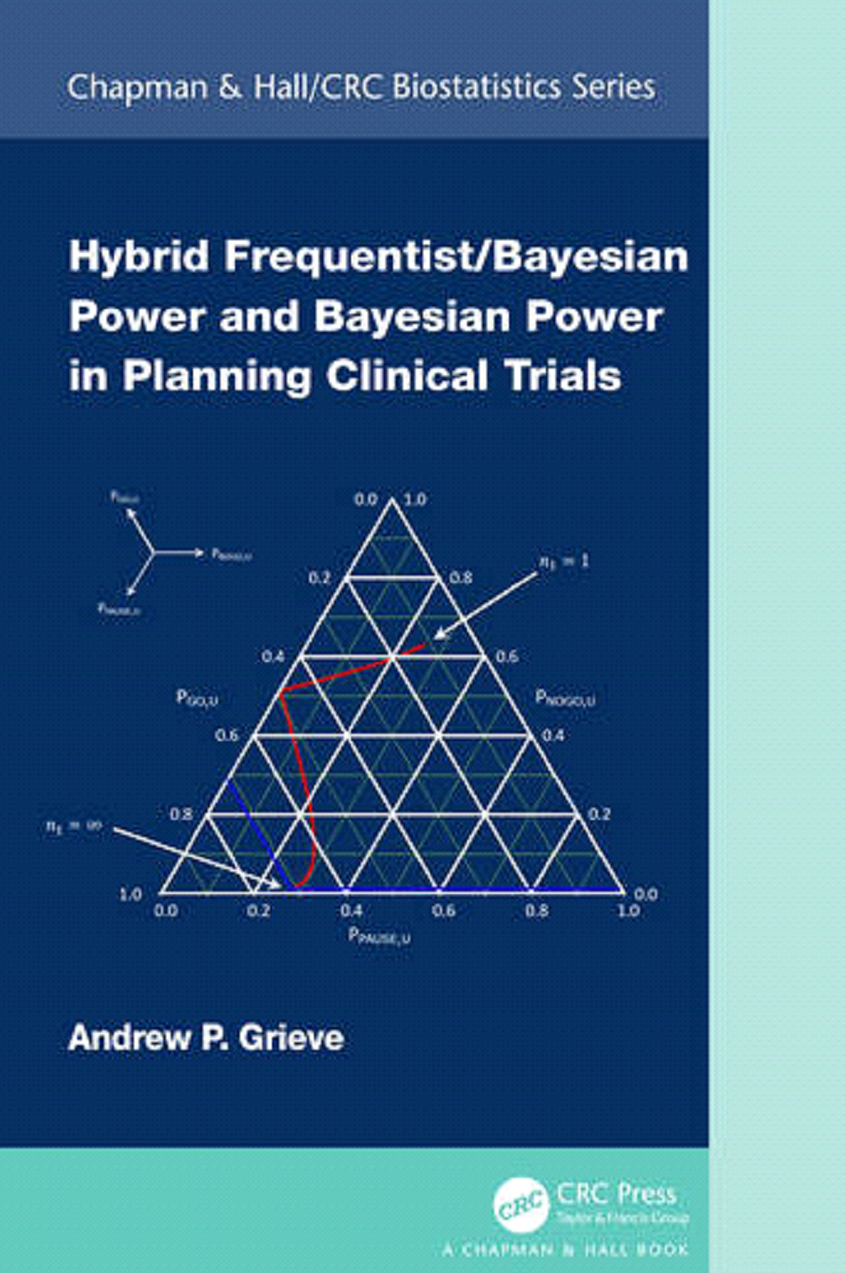 For the most part the planning of clinical trials is based on considerations of the power of a test of a given alternative hypothesis based on ideas introduced by Neyman and Pearson in 1933. As early as 1939, Jeffreys pointed out that if the true value was unknown, so was the power. Jeffreys suggested that to understand the true power of a study the conditional power values should be averaged with respect to their prior probabilities, an unconditional power. This idea was taken up in the 1980’s by Spiegelhalter and colleagues and in the early 2000s by O’Hagan and Stevens who introduced the concept of assurance.  All of this work uses unconditional as opposed to conditional probabilities.
The course is based on a book with the same title in the Chapman Hall/CRC Biostatistics Series to appear in May 2022. Topics covered include:
⦁ Expected Power, Average Power (AP), Predicted Power, Probability of Success and Assurance for a Simple Normal Model with Known Variance
⦁ Bounds on AP and Assurance
Sample Size for a Given AP/Assurance and ⦁ Normalized Assurance.
⦁ Applying Assurance to a Series of Studies
⦁ Assurance for a Clinical Trial with a Single Interim Analysis
⦁ Non-Inferiority Trials
⦁ AP in Non-Normal Settings – Unknown variance, Binary Data, Survival Analysis
⦁ Bayesian Power (BP)
⦁ Bounds on BP
Sample Size for a Given BP/Normalized BP
⦁ Posterior Conditional Success Distributions
⦁ Prior Distributions for Power and sample Size
⦁ Interim Predictions and Links to AP
⦁ AP with Multiple Decision Criteria – Normal Model with Known Variance
⦁ Bounds on AP and Assurance
⦁ Generalized Assurance
⦁ Bayesian Approach to Multiple Decision Criteria.
⦁ Posterior Conditional GO/NOGO/Pause/Distributions
⦁ Surety and Assurance in Estimation
⦁ An Alternative to Power in sample Size Determination
⦁ Unconditional Sample Sizing Based on CI width

Dr Grieve studied Mathematics (BSc) and Applied Statistics (MSc) at Southampton University in the UK and received his Ph.D. in Statistics from Nottingham University also in the UK and an Honorary Doctorate from Kingston University for Services to Statistics.
Dr Grieve has been with the Belgian pharmaceutical company, UCB, since 2017 and established the Center of Excellence for Statistical Innovation (CESI), where he is now a Statistical Research Fellow. Prior to joining UCB he was a Vice President in the Innovation Center of the Contract Research Organisation ICON/Aptiv Solutions.
From 2006 to 2010 he was Professor of Medical Statistics at King’s College London in the Department of Public Health Sciences. Before joining King’s he spent over 30 years in the pharmaceutical industry working for CIBA-GEIGY, in the UK and Switzerland, ICI Pharmaceuticals (Zeneca) and Pfizer.
Dr Grieve has worked in all areas of pharmaceutical R&D in which statistical methods and statisticians are intimately involved including drug discovery, pre-clinical toxicology, pharmaceutical development, pharmacokinetics and pharmacodynamics, phase I-IV of clinical development, manufacturing, health economics and clinical operations.
He has served on advisory committees of both the MHRA and EMA, and has been a member of UK Government Panels on “Imaging Techniques as an alternative Measure of Efficacy in Cardiovascular Drug Development”, “Personalised Medicine” and “Dose Response designs in Phase I and II” and has run in-house workshops for the US Food and Drug Administration.
Dr Grieve is a Fellow, Chartered Statistician and former president of the Royal Statistical Society; Fellow of the American Statistical Association and honorary life-member of Statisticians in the Pharmaceutical Industry of which he is a past-Chairman and founder-member.
Dr Grieve’s statistical research has been primarily concerned with the application Bayesian ideas and techniques of statistics to the pharmaceutical industry. Latterly he has concentrated on the design and implementation of Bayesian adaptive trials, and the Probability of Success (PoS) of studies and drug development programs. He has published over 140 articles and is the author two books. The first, for non-statisticians involved in clinical trials is entitled “FAQ’s on Statistics in Clinical Trials”. The second will appear in May and is entitled “Hybrid Frequentist / Bayesian Power and Bayesian Power in Planning Clinical Trials. He has been an invited speaker at national and international conferences on over 300 occasions.
Share